Bond returns in Skyfall and there are smiles all round…

The last time I went to see a Bond film was in 2008, Quantam of Solace was eating up the box-office, yet I left the cinema feeling…disappointed. The villain was as wet as a sock in a puddle, and Bond had lost his edge after the death of his lover, Vesper. Snore. But I enjoy Bond films, so upon hearing another was being made, back in early 2011, (despite finacial difficulties), I vowed I would see it.

Eventually, I watched Skyfall with my parents, about a week after it was released at the cinema. We were under the impression that the fans would have calmed down a bit, and the queues would be shorter. But apparently the hype hadn’t died down (if at all!), because we had to wait for fifteen minutes before we could even get into the screen. I took this as a very good sign. 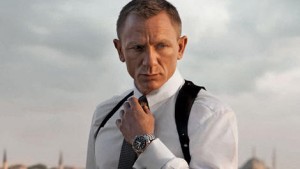 Before the opening titles even start (with help from Adele and her epic, Shirley Bassey-like tones, perfect for a Bond theme song) you are glued to the screen, as Bond (Daniel Craig) frantically chases some baddies across the rooftops of Turkey. On a motorbike. With lots of shooting. And explosions. It’s all because the baddies have stolen a hard-drive containing information about undercover NATO agents in terrorists groups. Then someone hacks into MI6’s system: an ex-00 agent (Javier Bardem), who goes by the name of Silva. He is out for revenge, and it looks like only Bond can stop him.

As always, the action scenes steal the show (and there are a few of those!), including a tense chase in and around the London underground. The story takes Bond all over the world, most notably Shanghai. This is purely because of the clever use of light contrasting with dark featured in many of the scenes there is dramatic and exceptionally stunning. Plus, like any Bond film, there is a pretty lady or two to look at, so the boys will be pleased.

Daniel Craig is at his very best here, and the one-liners also come in thick and fast, which may not be to everyone’s liking, but seems to work with Bond’s rather dead-pan humour, matched only with his new partner, Eve’s. She is played by Pirates of the Caribbean: Dead Man’s Chest starlet, Naomie Harris (clue: “You have a touch of…destiny about you, William Turner.”). Watching them interact is like watching a fencing match: it’s swift, fluid, and packs quite a cheeky sting! 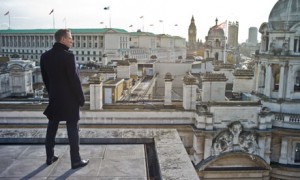 I may go as far to say that, in this particular instalment, Craig has completely blown his previous Bond performances out of the water, perhaps even that of Sean Connery’s as well. He is a darker, more human Bond, clearly with an increasing problem with drink, but still with a massive ego…and maybe even a sensitive side. Dench also returns in what is to be her final performance as M. You’ve got to hand it to her, though, she has been playing the same woman since 1995, so I think she deserves to go out with style – and does she hell! Ben Whishaw (Perfume: The Story of a Murderer, Cloud Atlas) makes for an inspired casting choice for the role of Q. We’re used to seeing Q as a much older man (courtesy of Desmond Llewellyn), so seeing him in a young, rather dapper combo of thick spectacles, bold-coloured jersey and perfectly coiffed hair was rather interesting to see, even before he’s opened his mouth. However, the droning wit between him and Bond remains, with the extra-added addition of Bond mocking him about his age, which got many laughs out of the audience, I can tell you.

But the stand-out performance of the entire film, in my opinion, is Javier Bordam’s. Unfortunately, I haven’t had the chance to see No Country for Old Men yet, though all the people I’ve asked who have seen it always tell me, without fail, about his performance as the bad guy. Moreover, Bordam is outstanding as Silva, despite the questionable haircut he’s got going on in the role. Silva loves flamboyance, to the point where he enters the film via a dramatically slow-moving lift. He is witty and intelligent, and you wonder what could have possibly happened to him to want revenge so badly? As the film progresses, however, it is revealed he is clearly the stereotypical Bond villain, who is not only emotionally scarred by his past…but also physically, as the result of working for MI6.

In conclusion, this is probably one of the best Bond films so far, and – guess what? – According to the credits, he will be returning again soon…