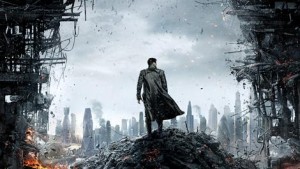 Okay, I admit it; even though I proudly call myself a geek, before J.J. Abrams rebooted Star Trek in 2009, I had never watched a single episode all the way through, or any of the spin-off films, for that matter. In my defence, though, I tried watching the series when Patrick Stewart was Captain Jean-Luc Picard, but as I was only about seven at the time (and even though I really, really wanted to) I didn’t understand any of it. This was exactly why the film reboot was such a welcome breath of fresh air, because Trekkie newbies like me could appreciate and enjoy it almost as much as the hard-core fans. 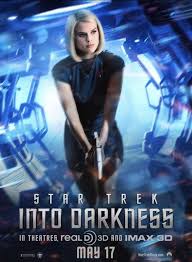 Star Trek into Darkness is no different. As the title suggests, it takes the crew of the Starship Enterprise into much shadier territory than before. Captain Kirk (Chris Pine), Spock (Zachary Quinto) and all the others are sent on a mission to find an unstoppable force hiding within their organisation, after a series of devastating terrorist attacks shakes it to its very core, one of which is partly carried out by a desperate – gasp! – Noel Clarke (Mickey fromDoctor Who! My Geek-radar is going nuts right now!). But who is the mastermind behind them all? A brilliant, relentless man with the very unassuming name of John Harrison (Benedict Cumberbatch, War Horse) – who also goes by the title of Kahn, which fans will be quite (ahem) familiar with.

It is terrifically fast-paced, blasting you off on quite the light-speed (hee!) rollercoaster ride, particularly when combined with the sheer power of IMAX (phew). As aforementioned, all the well-known characters return (my favourites are still Spock, and his strangely expressive, inexpressive face, and Simon Pegg’s Scotty, who is clearly having the time of his live playing this role, fulfilling a childhood dream), but there is new girl on board: Carol Markus (played by Trevor Eve’s daughter, Alice Eve), who appears to be quite a mysterious woman with some kind of hidden agenda. Now, I have no qualms over her acting ability, and though I would have liked her to have more to say, there is a scene that doesn’t fit with the pace of the film at all, and stood out strangely (and oh-so gratuitously) within the trailer. Okay, granted, I’m sure the majority of people going to watch this are young males, but gosh darn it, not everyone is, so didn’t feel completely necessary in this reviewer’s opinion. 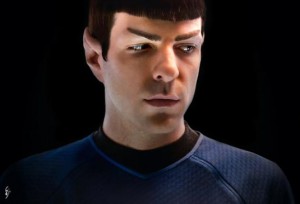 Which brings me nicely on to Benedict Cumberbatch as Kahn, and my goodness me; it looks as if Tom Hiddleston’s Loki has some competition as Most Complicated Geek Villain. For a start, Cumberbatch has the best voice for the role, one that can turn even the most trivial of sentences into something dark and sinister (which is why he is going to be playing Smaug in the next Hobbit film! Yay! More geeky happy feelings!); his performance as Kahn puts all the others actors to shame, with a simmering fury (insanity?) that never boils over. In short, he has the audience hanging on his every word, and you find yourself missing his dark, brooding presence when he’s not on screen.

Unfortunately, Star Trek into Darkness still has its faults. As I mentioned before the plot is incredibly quick, and this can be quite disorientating at times. A significant example of this comes nearer the end of the film (which I will try to keep vague for those who have yet to see it). Some important information for the story, concerning the Starfleet’s boss appears to have been forgotten in all the excitement and explosions. It left me scratching my head, wondering if perhaps the jarring vibrations of the IMAX had scrambled my brain a bit. Also, a fan-favourite species is mentioned and seen only briefly in a way that doesn’t justify how popular they are, which I found a bit disappointing.

All in all, though. Star Trek into Darkness is a thrilling roller-coaster of a film, with unexpected turns, hilarious squabbling between Spock and Kirk (as always, it never gets old), and a villain whose mere presence is enough to make him a cult favourite without the old films to look back on. I actually want there to be another sequel to this.

Yugor talks about his experience of moving from Russia to England at a young age.