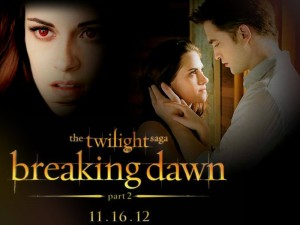 Ok I am not a fan of the Twilight books or films, I haven’t read or seen any of them but I promised a friend I would accompany her to see this, the final instalment. I didn’t really have any expectations but was pleasantly surprised with some aspects of the film while some were predictable, especially Kirsten Stewarts (bad) acting.

Picking up from where the last film leaves off (explained to me by my friend) Bella is now a vampire after nearly dying during giving birth to her half vampire half human child Renesmee. So she has to adjust to her new found speed, strength and hunger for human blood before she can meet her daughter, she goes off to hunt but the whole running at super speed scene just looked rather ridiculous. When Bella meets her we see she has the power to show people her memories, but the CGI Renesmee used is quite frankly scary! She grows at an abnormal rate and when Irina sees her she believes that the Cullens have broken the law of creating an immortal child, one of the biggest threats to vampires. 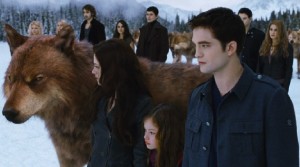 Alice has a vision of the ‘Volturi’ coming to kill them all for breaking this law, so they gather vampire’s from around the world as witnesses to the fact she is in fact half human, half vampire something which has never been heard of before, so we end up with a rather eclectic group of vampires many of who had impressive gifts and are quite well played by the various actors, and although Alice disappears she does leave Bella clues on how to protect her daughter if the worst happens, knowing that because she’s a shield her thoughts cannot be read.

At this point I’m just going to skip to the end because although there are some nice moments, especially the bonfire scene, it’s a bit slow paced and nothing important really happens. So the snow sticks as Alice warned and the Volturi come, headed by Aro to kill the coven but even though he sees that Renesmee is not an immortal child he still views her as a danger, so in walks Alice to offer proof she isn’t however Alice sees that he will not change his mind so battle ensues, with Carlisle running forward to confront Aro and having his head ripped off the gasps in the cinema were audible, obviously I know now that this battle scene was not actually in the book. The battle is pretty impressive with the werewolves playing an integral part,  and the gifts of the vampires being used with great effect, there are a few more deaths along the way (mostly the males actually) ending in a three-way battle with Edward and Bella fighting Aro, ending in his death… But then surprisingly the scene changes back to the original setting as it turns out Alice is showing him the outcome if he tries to fight the Cullen coven, so it all turns out to be a happy ending with everyone walking away.

There is a nice flashback between Bella and Edward showing their entire history set perfectly to Christina Perri, also a flash forward revealing Renesmees and Jacobs relationship growing into love, so overall despite being a bit slow at times there the acting for the most part was really good especially Mackenzie Foy as Renesmee, and the effects and soundtrack were spot on.

So although it hasn’t left me wanting to see the other films or read the books it was an enjoyable film and hard-core fans of Twilight will love it.