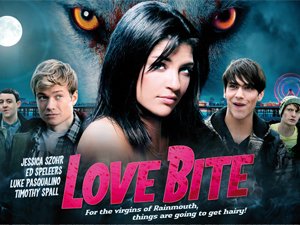 The premise of Love Bite is a group of teenagers attempting to lose their virginity in the British seaside town of Rainmouth, and with a werewolf intent on turning anyone who has not popped their cherry; you have a crude and unoriginal film with characters that are just honestly idiotic!

Jamie is bored of his life, he is single handily running his pot head mum’s B & B and in his free time hanging around the fair ground and chip shop with his 3 best friends whose only aim in life is to work in a pie shop and get laid, so when he meets Juliana a beautiful American travel writer he is smitten for the start, however when eccentric werewolf hunter Sid accuses her of being the werewolf responsible for several teenagers disappearances he starts to doubt her and becomes an amateur hunter himself. Turns out she’s actually a hunter (and a much better one then Sid) but when she is turned Jamie refuses to kill her and instead turns himself and they spend their life happily ever after as werewolves.

The characters were ok actually kind of realistic from what I remember of high school boys, although these have been hugely over exaggerated and just verge on being ridiculous, with cheap sauce squirting gags and dirty one liners, then add in the girls who are just as vile and crass and you end up with a film that is actually slightly horrific but for all the wrong reasons. The only thing that slightly saves this film is the romance of Jamie and Juliana, it seems very realistic of a nice guy trying to woo a girl way out of his league, with some cute awkward moments, although once again some idiotic innuendo gags and the ending just turns this into a joke as well.

This is another let down, even for a low budget film there just isn’t enough to pull you in and keep you there till the end, I probably would have left half way through if it wasn’t for the fact I was with friends, who actually didn’t like it either. I would recommend not bothering to go and see this especially if you’re over the age of 15 because it just isn’t funny and will leave you cringing rather than laughing.