Becca gets hit by Tropic Thunder in this hilarious parody of everything film.

Take a glance at the poster for a second. Looks like a stereotypical, tedious run-of-the-mill action movie, right? True, you’d be almost completely correct, but only almost. The movie is in fact a movie WITHIN a movie.

With me so far? Okay. A group of high-maintenance actors are plunged deep in the jungle to make a high-budget film called ‘Tropic Thunder’, based on the experiences of a Vietnam War hero, who unfortunately lost his hands in battle. But when their director (Steve Coogan) gets blown up by a mine, the penny slowly begins to drop that maybe, just maybe, making the film is the least of their worries.

There’s Tugg Speedman (Ben Stiller), a Sylvester Stallone-like action man who cannot cry on command, Jeff Portnoy (Jack Black), famous for playing an entire family of fat people (think Eddie Murphy in The Nutty Professor) and Kirk Lazarus (Robert Downey Jr.), an Australian who immerses himself in his roles so much, he undergoes a major operation that turns him black, especially for his part in ‘Tropic Thunder’.

So what makes this film so great? It’s such a blatant guy film, what with all the explosions, filthy language and the distinct lack of female characters, I often wonder how it is so many people – women included – grin when it is brought up. Personally, I think it is because the entire film is essentially a parody of the film industry. The lifestyles, the product placement, even the fake trailers at the beginning hit it spot-on, particularly the ones staring Stiller/Speedman. They address the habitually ridiculous absurdity of action sequels…and he’s made five of them. Look out for a rather unorthodox cameo from Tobey Maguire in Kirk Lazarus’ film, ‘Satan’s Abbey’.

I probably should talk about Ben Stiller first, as he is the main character, but to be frank, he is the same character Stiller is so good at portraying (i.e. the moronic guy who doesn’t really know how much of a moron he is), so I shall move onto Robert Downey Jr.’s role. The man got nominated for many awards for it, and you can see why. When he’s not wearing an afro etc. he’s got blonde hair, incredibly startling blue eyes and an Australian accent, but he steals the show as “the dude, playing the dude, disguised as another dude” (a quote which has yet to lose its comic effect, like most of his lines), and proves how much of a method actor he is.

This makes me wonder if the same can be said for Tom Cruise. Yup, he has a role in Tropic Thunder as well, don’t you know. He plays Len Grossman, the big cheese behind Tugg Speedman’s career – honestly, just look at those pit-stains! This was an unexpected move from Cruise, as we are more accustomed to him playing Ethan Hunt, rather than a balding, overweight dude who has enough power to make strangers punch people in the face for him, likes a nice dance to the odd expletive-ridden rap song (case in point: the end credits), and swears like a drunk sailor. It’s hard to tell if this is him flexing his acting muscles, or just messing around; probably a bit of both.

So, Tropic Thunder is not your standard action-comedy film, with an incredibly un-PC, tongue-in-cheek look at the action industry that has been a long while coming. 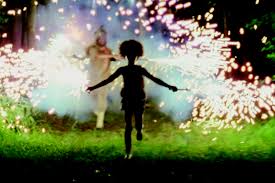