Is Paul out of this world? Becca investigates further… 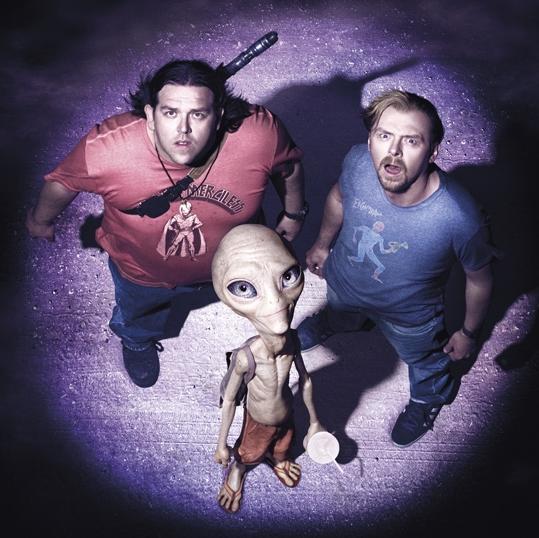 Nick Frost and Simon Pegg; they’re the Ant and Dec of the film industry, seen together in Shaun of the Dead, Hot Fuzz, and even The Adventures of Tintin, while silently accompanied by Edgar Wright, who is the director and/or writer for all of these rather excellent films…but not this one, I’m afraid.

Paul (voiced by Seth Rogan) is an alien; he smokes, can camouflage himself and has the power of healing. He enters the lives Clive and Graeme (two British nerds on a road trip to all the legendary extraterrestrial hotspots in America), and It becomes apparent that Paul is on the run from the United States Secret Service. They captured him when he landed on Earth (squishing a young girl’s dog with the same name) many years ago to learn more about him. So why has he run away, I wonder?

If anything, the main audience for Paul is probably those who will sit and chuckle, when they recognise the countless references to countless alien films mentioned throughout, like E.T, and the facts that Graeme and Clive speak fluent Klingon (as heard in Star Trek), and that they wear comic-book-hero related t-shirts. Nevertheless, audiences who don’t grasp these references will still enjoy themselves, particularly if they are familiar with Pegg and Frost’s unashamedly bromantic relationship, and their brand of rather potty-mouthed humour. Kristen Wiig (Bridesmaids) also stars, as a young Christian woman whose faith is shattered by Paul – with hilarious results – though it is at the expense of religious beliefs, so Christians, stay away if you don’t consider that funny!

Jason Bateman is a gloriously foul-mouthed villain, as well as bumbling police duo, Haggard and O’Reilly (Bill Hadler and Joe Lo Trigolo – brilliant name, by the way) who have to get Paul back inside the clutches of the US Secret Service. Honestly, after watching the film, you have to see the bloopers, just to see as they try to get their lines out without sniggering like school boys.