As a self-confessed big kid when it comes to animated movies (ok everything) I was really excited to go see Madagascar 3 and I was not disappointed, it’s actually my favourite movie of the year so far, it was hilarious, vibrant, emotional and just plain brilliant! I have now seen it twice and I would still go again.

Picking up from where the previous film leaves off,  Alex, Marty, Gloria and Melman have become bored of their life in Africa and desperately want to get back home to New York so decide to swim to Monte Carlo where the penguins and monkeys are gambling away Africa’s jewels quite convincingly disguised as the King of Versailles. Their arrival and infiltration of the casino was well planned but fails as they end up falling through the ceiling, this attracts the attention of Captain Chantel DuBois of Monaco Animal Control, who has some serious moves including running through walls, jumping a building on a scooter and singing opera, she also adopts a very dog like way of tracking the animals which leads to a high speed car chase with Marty behind the wheel, they manage to escape in the plane built by the monkeys but as predicted they crash short of their New York destination.

As our New Yorkers look for a way to escape they stumble across a circus train and beg to be let on board telling them that they are also circus animals and since ‘circus stick together’ they all head to Rome, with the penguins buying the circus along the way.  This is how we meet the new stars of the film, there’s Stefano the sea lion, Gia the jaguar, and the bad-tempered Vitaly the tiger, also Sonya the Bear, whom King Julien develops a romantic yet hilarious relationship with.

Unfortunately the circus has lost its passion and the show in Rome has the audience demanding their money back, so it’s up to Alex to save the day and after an inspirational speech the work starts on completely reinventing the act, with Marty and Stefano learning to fly, the not so cute British puppies putting on rocket powered roller skates and Gloria and Melman learning the tight rope, but most impressive is Alex and Gias trapeze skills unfortunately Dubois is still hunting them down so the race is on to reach London before she manages to add Alex’s head to her collection. 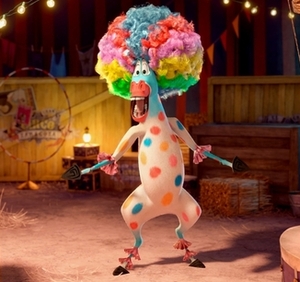 There is a complete transformation when we reach London; the performance is breath-taking in one of the most entertaining scenes in the entire movie. It starts with Vitaly’s impossible jump through a ring that could fit on my little finger, then the real show starts in a blaze of colour with the neon stage floating through the air, and Katy Perry’s ‘Firework’ track adding the perfect sound to the action as all the acts take to the stage with characters flying effortlessly through the air defying all the laws of physics, and they’re given the our contract to America. However they’re celebrations don’t last long when Dubois shows up and reveals the truth about Alex and the others all being from a zoo, Vitaly, Gia, Stefano and the other circus animals are all deeply hurt by their betrayal so although they all go to New York Alex, they go their separate ways with Alex, Gloria, Marty and Melman going home to the Central Park zoo.

Regret is instant, they realise they don’t want their old life back and that actually the circus had become their home but before they can go back Dubois darts them and unwittingly becomes a hero when the Zoo guards see she’s with Alex, but she is still determined to have his head on her wall so she plans to use a killer dart during his return performance as she accepts her reward. It looks like it’s all over for them until Gia, Vitaly, Stefano and all the members of the newly named ‘Afro Circus’ come to their rescue in yet another stunning display of neon lights and afros. Dubois ends up where she belongs trapped in a cage and later on a boat to Madagascar while Alex, Marty, Gloria and Melman run away with the circus, re-joining characters old and new to live happily ever after. 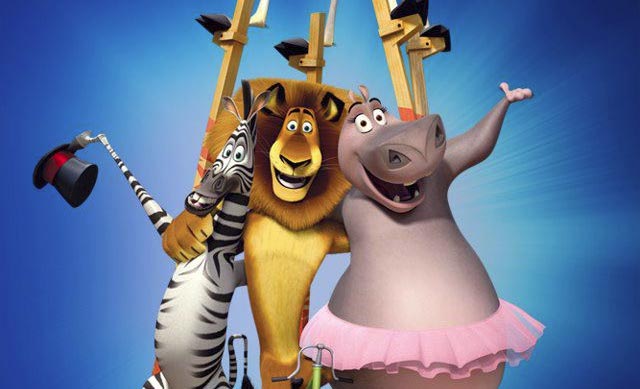 This was honestly the most entertaining and colourful film I’ve seen, the animation was amazing and the voices were a perfect match to the characters. I would probably say it’s better than the first 2 movies which is refreshing as usually follow up films are a huge let down and never seem to measure up, I would recommend everyone young and old goes to see this film but be warned you will end up with the afro circus/ I like to move it remix song stuck in your head for days after! (It is now my ringtone).