After seeing Sinister I was quite looking forward to watching this film as it was made by the same people, and especially as I have never seen any of the previous instalments, however after sitting through the film I can honestly say it was one of the worst horror films I’ve ever seen. 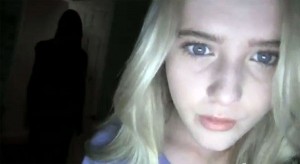 At the beginning of the film we see Katie, who is possessed by a demon, kill her sister Kristi, her husband and runs away with their son Hunter. The story then jumps ahead to five years later and focuses on siblings Alex and Wyatt, Alex’s boyfriend Ben, and a frightening little boy across the street named Robbie. Alex and Ben decide to use laptop webcams to document the frightening supernatural occurrences that happen when Robbie is around Alex’s house. Robbie strikes up a friendship with Alex’s brother Wyatt, and soon Wyatt’s personality starts to change as he is introduced to Robbie’s ‘imaginary friend’.

I’m not even sure where to start with this film, I spent the first half an hour waiting for something to happen, and past this I just got bored, there a few jumps to be had at loud noises and the cat jumping in front of the camera unexpectedly but other than that there is just no substance to the story, things happen, such as the chandelier falling right in front of Alex but is then never mentioned again, the camera work is dodgy and out of focus and  the ending is just, well rubbish! Everything happens within the last 5 minutes of the film, with everyone dying in typical horror movie fashion but with strange new aspects of the film popping up such as an army of demon women who actually play no part and suddenly Wyatt is Hunter, but if he is Hunter, who is Robbie? You leave with so many unanswered questions it feels as though you left the film half way through.

There are only 2 things that save the movie slightly, first of all the acting; it all seemed very natural and believable with Kathryn Newton who played Alex, managing to pull the audience through to the end, while you are actually kind of creeped out by Robbie’s very distant personality, and everyone else gives a admirable performance considering the script they had to work with. Secondly the coolest part of the film for me was the use of the motion-detection Kinect add on for the Xbox 360, which when shown in infra-red covers the room in green dots allowing you to see the figure of a child following Wyatt while he speaks to another invisible entity, however who these entities are aren’t actually ever explained.

Overall this was a hugely disappointing film and I would honestly not waste your time or money going to see it.