Becca takes a look at a zombie film with a romantic twist…there’s something you don’t hear everyday! 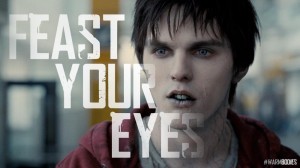 I’m going to be honest with you, I tend to avoid zombie films if any are released at the cinema (well, except maybe Shaun of the Dead, but you don’t have to love horror to enjoy that). This is probably because I am a complete and utter wimp, and do not enjoy the idea of one chasing me, but that’s another story…

Warm Bodies, on the other hand, is a zombie film with a difference. It’s a zom-rom-com; yup, a romantic-comedy with dead people, based on the book by Isaac Marion who took inspiration from a certain Shakespearean play.

Our main character is R (Nicholas Hoult, X-Men: First Class), a zombie who can’t remember his name, but is unlike any of the other living corpses. You see, he still has a conscience, which is a real problem when it comes to feeding off those unaffected by whatever it was that started this whole apocalypse. He also has a thing about collecting trinkets and vinyl records he keeps in a plane at an abandoned runway in a way that is strangely endearing. 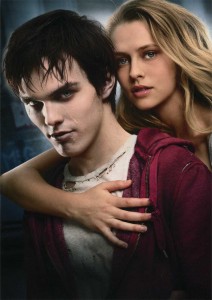 But, of course, the living humans do not know this, as they are hidden on the other side of the giant wall separating them from each other, until one fateful day when R rescues Julie (Teresa Palmer, The Sorcerer’s Apprentice) from being eaten…though he still has time to scoff the brain of her boyfriend. Imagine her confusion when he takes her back to his plane, where it is ‘safe’. There, she discovers he isn’t like the other dead people, and an unlikely romance begins to blossom, which starts to bring R and the zombies back to life.

The film begins with a dead-pan (ha-ha, zombie humour) monologue from R criticising himself, which frequently happens with hilarious comic timing, particularly when he checks his behaviour around Julie, telling himself over and over again to not be creepy before speaking to her. That’s right, a zombie that can speak! Hoult’s American accent is impeccable, and when combined with the authentic zombie shuffle we’re so tiresomely familiar with, and the realistic-looking make-up to finish it off, you are successfully distracted from wondering “where have I seen this guy before?” which is always a good sign of a great actor.

His chemistry with Palmer is awkward in a funny way, with very little angst (so you can stop with the questions about Twilight comparisons right there, alright?). R hardly says anything, but when he does it’s incredibly sweet, such as when they are listening to his vinyl collection (saying that, the music in this film brilliant). However, it is R’s fellow zombie buddy M and Julie’s friend Nora who end up stealing the show with all the best, surprising lines.

The only downside to this film was the creatures known as ‘Bonies’. They literally are living skeletons, who used to be zombies, and are also the ones in charge in their territory. Except when compared to the clever use of make-up to make the zombies look as real as they do, the use of CGI has left the Bonies looking oddly blurred, but still very creepy.

So to conclude, Warm Bodies does what the title tells you; it leaves you with a warm feeling in your heart. If you are one of those who perhaps do not enjoy the idea of watching Night of the Living Dead or Resident Evil, but are tired of the conventions of your standard rom-com, then this is the film for you.