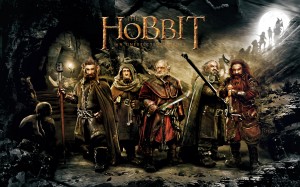 Middle Earth fans ‘ prayers are finally answered in the (belated) film of the popular  prequel to Tolkein’s trilogy.

I fell in love with the world of Middle Earth aged 9. I would go on to read the books, and for Christmas I then received a copy of – you guessed it – The Hobbit.

Unlike the books that followed, it was aimed at younger children…so why hadn’t it been made into a film first, after it was said Lord of the Rings would be ‘unfilmable’? Well, that time has finally arrived.

I saw it in IMAX, so the experience was further heightened by deafening surround-sound, and having to turn my head to accommodate all that was happening on an absolutely massive screen. Not that I was complaining…though my neck certainly was! 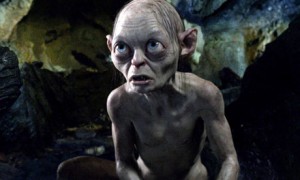 Made in 3D, and in twice the normal frame rate (which I am still unsure about), the Hobbit in question is Bilbo Baggins (Martin Freeman), a tubby little fellow who, like all Hobbits, lives in a hobbit-hole in the lush country of the Shire. He lives a comfortable, but rather dull life, until he is visited by a very familiar-looking wizard named Gandalf (Ian McKellen), who asks Bilbo to join him on an exciting adventure.

A little puzzled (and more than a little bit daunted), Bilbo politely turns down his invitation, and sends the wizard on his way, believing this will be the last time he sees Gandalf…so imagine his surprise when thirteen, battle-ready dwarves turn up on his doorstep that very same evening, and start eating all his food! 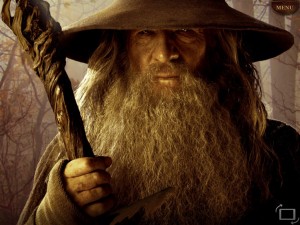 Besides Gandalf, their leader is Thorin Oakenshield (Richard Armitage), a Dwarf-Prince who proposes they (and Bilbo) go on a quest to reclaim his grandfather’s kingdom, Erebor. A fearsome dragon by the name of Smaug attacked and invaded their home many years before, taking all the gold for his own, including a large diamond called the Arkenstone, and naturally, Thorin wants it all back.

But where does Bilbo comes into this, I hear you ask? Due to his small size and quiet nature, he is ideal for the role as a burglar, and can sneak around unnoticed by whatever foe may come their way – and there are a lot of those, as you would expect!

Like all of the Lord of the Rings films, the scenery and the music are suitably EPIC. Yes, the capital letters are necessary, just to convey how truly epic they are, particularly when stretched across a giant screen. There are also some familiar faces along the way, but none more so than Gollum (Andy Serkis), who Bilbo stumbles across in a cave.

In a bid to save himself from getting eaten, Mr. Baggins challenges Gollum to a game of riddles. This turns out to be one of Serkis’ finest, most entertaining performances, as Gollum (and Smeagol!) try to outsmart the hobbit, while arguing with himself constantly.

Freeman takes to his role as Bilbo like a very British duck to water, and the resemblance between him and Ian Holm (the older Bilbo) was incredibly surprising. As for Ian McKellen, well, it is as if he hasn’t played Gandalf since 2003 at all, and falls into the role once again wonderfully.

However, I do still have my doubts about the book being stretched across not just two, but three films. To fill them out, Jackson delved into some of the appendices of the Lord of the Rings book series; the result was that some of the added scenes didn’t seem particularly necessary (though a real hoot to watch), and gave the film a rather bloated feel.

My other criticism is the quality of the camera tone. It was a nasty surprise when the film started, as the audience is not used to being able to count every pore on Martin Freeman’s face, and though you get used to it after a while, the blurring is a little distracting.

The second part of The Hobbit is called The Desolation of Smaug, and will be on our screens on the 13th December 2013. The final part is There and Back Again, which is out on the 14th July 2014.