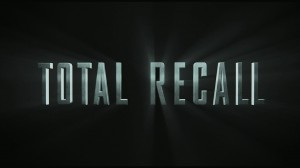 Remakes are hard to pull off – especially if the film that is being remade is a cult classic like Total Recall.  The original version of this film was a dystopian sci fi set on Mars and was based on a story by Philip K Dick writer of mind-bending stories. It starred Arnold Schwarzenegger .and was ultra violent but had a lot of iconic moments, for example a woman with three breasts (who is also in the new version). The newer version diverges from this, mainly by being set on earth but is also different in style but keeps the sci fi theme. It might not be a straight remake, but that doesn’t stop it being compared to the first film.

In the 22 years  since the original was made the biggest advances in film making has seen the increased usage of CGI, which in comparison makes the original film look fairly creaky. The remake uses CGI to create a monumental landscape quite a lot like Bladerunner (another Philip K Dick based film) with its constant rain, neon lights and colourful population. The effects enhance the action scenes to a point when you don’t know what’s real and what’s been created.

The latest version of Total Recall creates a different setting for the film but also with changes in the script. In a not very convincing future, chemical warfare has obliterated all life except in two places – Britain (United Federation of Britain) where the establishment live and 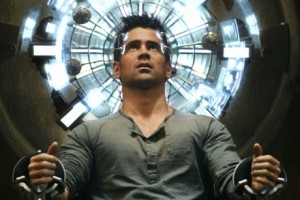 Australia (the Colony) where all the poor people live. Movement between the two opposite sides of the world is through a metro that passes through the Earth’s core called “the Fall”. One of these commuters is Douglas Quaid (Colin Farrel) who works on a synthetics production factory. Quaid craves more from life and goes to a site that creates synthetic memories of a fabricated experience, called Rekall. However things go wrong and Quad discovers he is already a real life spy and the life, his reality until then was fake. Thus his wife at the start of the film isn’t his wife any more, and is hell bent on killing him and he meets a woman of his dreams who is in fact his girlfriend in the new reality (played by Jessica Biel). So far so Philip k. Dick. The film then turns on the action as Quaid tries to find out who he really is, and who of the people he meets are real. The film keeps the confusing tempo going – and that’s what helps the film rise above the generic sci fi shoot em ups. The action scenes of the film are reminiscent of another Philip K Dick adaptation – Minority Report. The action scenes are well executed and are integrated into a convincing futuristic landscape.

The ultra violence of the original movie has been toned down to be acceptable for a 12A audience which seems to be the default certificate for a movie these days. The film lacks those iconic moments that really set up a good sci fi There’s no Kuato fastened to the belly of a man and in comparison Bill Nighy as head of the resistance cannot really compare. 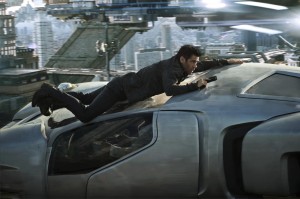 Another downfall of this version of Total Recall  is in the casting. Though Colin Farrel is a better actor than Schwarzenegger he lacks the charisma Arnie has. The chief bad girl, the original/fake wife is played by Kate Beckinsale looks particularly miscast and never really convinces. None of these or any of the other actors rise above themselves and none put in a memorable performance

Although Total Recall is no patch on the original, and maybe forgotten in a few years, it is still an enjoyable action movie with some nice aesthetics action and mind bending plot which elevates itself slightly above the mundane.