When you hear of a film about young boy’s teddy bear coming to life you automatically think of a movie for the whole family, well Ted certainly isn’t that, but it is a hilarious yet heartfelt comedy that will have everyone (over the age of 15) laughing, but what else would you expect from the genius behind ‘Family Guy’ and ‘American Dad’.

is an 8 year old kid with no friends, so when his parents give him a teddy bear for Christmas they soon become inseparable, one night he wishes for his teddy to come to life and when this wish comes true they both shoot temporarily to fame but vow to be thunder buddies for life, fast forward 27 years and John and Ted are still best friends, they live together and their favourite hobby is smoking pot and watching Flash Gordon, but John’s girlfriend Lori wants them to move on with their lives and get Ted out of the house, but how can John and Ted manage without each other? Well not easily and this causes all sorts of problems for everyone.

It is the three main characters, Mark Wahlberg, Seth MacFarlane and Mila Kunis that make this film so good, the acting is honest and understated, they portray sincere relationships between the 3 also the CGI used to create Ted is astounding, you actually forget that he’s not real because the actors eye lines are spot on and even in the high action fight scene the animation is flawless, in addition, Giovanni Ribisi plays an ultra freaky lifetime stalker of Ted and in his pursuit to ‘own’ Ted for his overweight son, puts on a compelling performance as a totally creepy stalker, there is also fantastic cameos from Sam Jones, bring Flash Gordon into the modern day, and also Norah Jones as you’ve never seen her before. 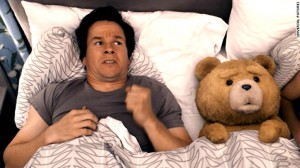 This is one of my favourite films of this year, I had expected the comedy to be that typical of Seth McFarlane but what I didn’t expect was the genuine heartfelt scenes that actually had me close to tears, however I wouldn’t recommend this to anyone who is easily offended as there are a lot of drug references, crazy behaviour, insane innuendos, some occasional racial slur, foul language and some shocking sexual antics but all of this adds to the comedy.

Overall this is a raunchy, intelligent and totally entertaining film that will keep you laughing long after the credits roll, definitely the must see film of the year!