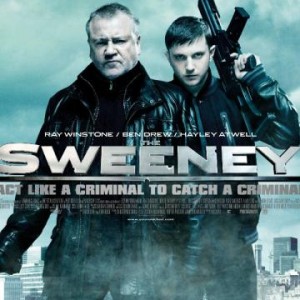 How do you make a film about police in the UK cool? British police don’t carry guns and you can never get far enough away from the stereotype of the bobby on the beat. This film makes a kind of compromise and the police in The Sweeney run around carrying baseball bats. when things finally warm up are they allowed gubs, but by, then all realism has been thrown out of the window.

The film stars arch cockney Ray Winstone as Jack Regan. Winstone is a great actor but this role is way too type cast and one that stifles him as an actor. It’s a clichéd role  of the old school, high testosterone policeman who gets results and doesn’t care how he gets them. A yawning problem  with Winstone in this film that he is way too old to be doing an action film like this and as a result he huffs and puffs his way through the film. He is so unconvincingly when he gets a chance to be so pretend virile – by having an affair with the IA chief’s wife – that he’s fooling no one. For younger audiences there’s Ben drew (AKA Plan B), as George Carter, the more considerate side kick. He’s alright  but the role never asks for any greatness in acting. It also stars Damian Lewis as chief putting a slight accent to cover his real life poshness. Then there’s the true bad guy the IA chief, Lewis (Steven Mackintosh) the antithesis of Ray Winnstone’s supposed virility. He is desk bound, anemic too worried about playing the rules, attacking police instead of criminals etc. He is as much of a cliché as Ray Winstone’s character.

The plot is pretty forgettable – it concerns the shooting of an innocent woman at a break-in at  a jewellery store. Some stuff happens, the investigation leads to a bank heist which is badly handled by the Sweeney and develops into a shoot out in Trafalgar Square which results in carnage. Winstone’s character has responsibility for the débâcle and it leads to him being briefly put in prison before being inexplicitly set free by his colleagues. It all ends with a car chase through a caravan park in Gravesend – but I can’t remember why.

It’s obviously that the director Nick Love was aiming to make a slick, Hollywood style crime caper, but on a low budget. The plot could have done with more humour, more of a nod to the old TV and films that this film was supposed to be based on. There’s little realism or any attempt to make one except to show the characters occasionally in an office. The film is helped along by lots of moody aerial shots of Canary Wharf and the City of London which sets the scene for a lot of the set pieces.

The Sweeney isn’t as bad as I thought it would be but it’s also not that great. The creators tried to marry British policing with slick American action but couldn’t quite make it work. The film is big and brash but it’s flimsy material. It may be entertaining to watch in the cinema but it’ll be totally forgotten afterwards.