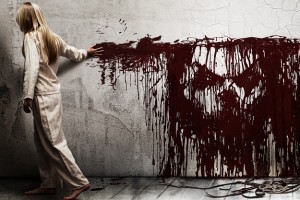 I was looking forward to seeing this movie, having not witnessed a scary film in quite a while. Coming from the makers of Paranormal Activity and Insidious, both scary films, Sinister has a decent pedigree, so it seemed worth watching.

The film centres on Ethan Hawke, who plays Ellison Oswalt a writer of books on murder cases. Oswalt has moved into a new house with his family, except this house is different – it’s the site of an old murder. Whilst searching through his house he finds a box which contains a projector with some film reels of family movies. Except these films contain something else – at he end of them is the grisly murder of those families. Furthermore there is something else that the family movies don’t reveal and that is what happened to the youngest member of the family. At this point the film lives up to its name  – it is sinister. From here you wonder where the film is going after providing the setting. However the film disappoints  and we then bear witness to nothing except the Oswalt character watching the films obsessively.
Such is the theme of the movie about films within a films, that it is the equivalent of watching someone watching the Blair Witch Project. Sinister as a film uses Oswalt as a plot device. What happens to him and his family are merely there to fill in the gaps around the home movies he watches. 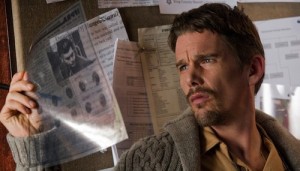 Because the film is about a guy watching home movies Sinister is a house bound film, mainly based in the one room, Oswalt’s office. The house is mainly darkened and filmed with wide shots creating this tension that something is going to jump out. However the scares are few and far between and not much really happens outside of the home movies and their murders.
It’s only in the final third of the film when stuff starts to happen when the endless obsessing of the films and their murders finally comes into fruition. From now on the film is finally a horror film – the use of shocks and the occasional jumps are used to good effect. However the moods of the film up to that point leaves the scares fairly muted.  In the end you have two parts to the film, a fairly intelligent moody piece to begin with and a spooky horror film at the end, but they never really marry together into one coherent film.
If you want to see a not very scary horror film and a not particularly intelligent film then try Sinister out. There are a lot of better horror films out there and nothing makes this film stand out to be worth bothering with. How ever it is a well made film and creates a mood and a few shocks that does as the title suggests – it is sinister.