Saddle up par’dners, it’s time for a rip-roarin’ ride in the west for liberty, vengence and romance in this latest escapade from Mr Tarantino…

I don’t know about you, but mention the phrase ‘spaghetti western’ to me, and I immediately imagine Clint Eastwood, trudging through some dusty town with a strange name that has narrow roads strangely ideal for gun slinging showdowns, set sometime in the 1800s. But there’s something missing. Black slavery was certainly the norm around that time, so how come there is nothing about it in these films? This appears to be the question Quentin Tarantino asked himself before making Django Unchained, and so decided to once again break the mould of his chosen genre in the most inspired (and controversial?) way as possible. 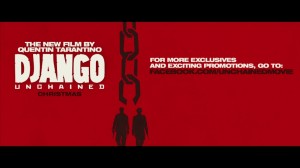 The story is simple enough: a hero named Django (Jamie Foxx) wishes to find and rescue his lady-love (Kerry Washington) from some nasty folk. But the difference with our hero is he’s a liberated black slave, and the nasty folk are traders. Also, his liberator/mentor is a smooth-talking German bounty-hunter called Dr King Shultz (Christopher Waltz), who seems to have warrants for every person (slave trader) he ends up killing; he teaches Django everything he knows, in order to get vengeance on those who have his wife. 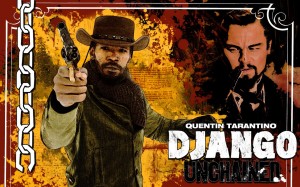 Leaving lots of dead bodies in their wake, the duo find Broomhilda at a plantation called Candyland, owned by charming but brutal Calvin Candie (Leonardo DiCaprio), who specialises in trading black men who fight to the death for his own profit. They try to bargain with him about buying Broomhilda from him. Yet Candie is not the only person they have to fool. His most faithful slave is Stephen (played with chilling zeal by Samuel L. Jackson), who has lived and worked for Candie’s family for almost all his life, and follows the white people’s way of thinking to the point where it proves to be rather prickly viewing. In a good way, though.

Django Unchained is a tip of a courteous hat towards the old westerns – but also a rousing punch in the face, as it sheds a brutal light on the racism they didn’t want to show back then. I counted the use of the n-word (nope, I don’t like saying it. There’s a generation gap for you) 107 times, and though the scene with the KKK having trouble with their masks was quite funny, I didn’t feel entirely comfortable laughing about it, knowing what their beliefs are.

I have only seen three of the films within Tarantino’s repertoire so far, but they are enough to get to grips with his unique style of quirky film-making, such as graphic violence so splattering, it sprays a white house red, and the post-modern music. An unexpected hip-hop track is used, for one example, which should not work within a story set in the 19th century. But it is used when Django is walking tall in leather, shades and a cowboy hat, beside Candie’s convoy of slaves and acquaintances, so it really does in a surprisingly powerful way.

Jamie Foxx proves to be an excellent hero, making Django’s triumphant transition from softly-spoken slave to ruthless bounty hunter, with a noble cause look utterly believable, often sparing his victims a single amusingly glib remark before they die. Waltz, however, almost steals the show (much like he does in Inglorious Basterds) with a suave and cheerful performance, which belays his rather bleak profession. You get the feeling Tarantino had the actor in mind when writing the story, and he certainly does not disappoint.

Despite the context of the film, it does not preach about racism. If anything, it gives you more reason to root for Django and Broomhilda, like any other love story…with that extra-added thrill and humour.